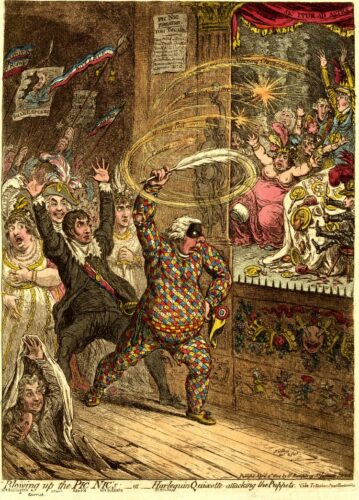 Description and comment from M.Dorothy George, ‘Catalogue of Political and Personal Satires in the Department of Prints and Drawings in the British Museum, Vol. VIII, London, 1947 [BMSat].

Richard Brinsley Sheridan leads the forces of the professionals against the amateurs of the Pic Nic Society, who are performing on a small, elegant stage, rising (without orchestra) from the boards in the foreground where these enemies advance. He is dressed as Harlequin; the tight chequered dress (slightly torn) accentuates his obesity; an empty purse hangs from his belt; in his left hand is a hat with a tricolour cockade (emblem of Jacobinism). In his right hand he flourishes a large pen whose feather makes wide swirling curves, terminating in firework-stars, and inscribed with the names of newspapers: ‘Courier’, ‘Morning Post’, ‘Morning Herald’, ‘Morning Chronicle’. He is masked, to indicate that he has been writing anonymous squibs against the Pic Nics. The swirls of his pen partly obscure a figure of Comedy, meretricious, and half-naked, holding up a mask which decorates the left pilaster of the proscenium. The actors follow in characteristic attitudes. Kemble (as Hamlet) wearing a ribbon, ranting in tragedy, directly behind Sheridan, staggers back with legs astride, both arms raised. On the left is Mrs. Billington, singing as in BMSat 9765, left hand on her breast. Mrs. Siddons (? as Lady Macbeth) clutches a dagger. Behind is the head of Lewis (see BMSat 9915), with a comedian’s smile, wearing a cocked hat. Crowds of actors pressing on from behind (left) and in deep shadow, are indicated by arms holding up banners; the chief one with the head of ‘Shakespeare’, badly torn. Others are ‘Otway Rowe’; ‘Kotzbue‘, and ‘Schiller’, both tricolour (indicating the supposedly revolutionary tendencies of modern German drama, cf. ‘The Rovers’ in the ‘Anti-Jacobin’, and BMSat 7054); ‘Jonson’, ‘Congreve’, ‘Addison’. In the foreground, through splintering boards, the ghost of Garrick rises, a mask in his hand.
A playbill shows that Fielding’s farce is being performed:

Only the left part of the stage is visible (on the right); the performers are terrified at Sheridan’s squibs, they can hardly have seen his followers. The actors, dressed in character, are feasting on the stage; in alarm at the attack the table is upset and dishes cascade to the ground. Dollalolla, Lady Buckinghamshire, her breasts bare, throws up her fat arms and one gouty leg; she wears a spiky crown or tiara, behind her is the sharp profile of Lady Salisbury (Huncamunca). The tall Lord Cholmondeley (not Lord Buckinghamshire) as King Pic Nic stands in profile to the left. with both arms raised. Next him is a man dressed as a military officer, Colonel Greville. Little Lord Mount Edgcumbe [Styled Lord Valletort by Wright and Evans, his courtesy title 1789-95.] as Tom Thumb (or Alexander the Great) sits in profile to the left. on a three-legged stool, arms and legs extended, holding knife and fork. He wears armour and a feathered helmet as in BMSat 10169. On the festooned curtain (in place of ‘Veluti in Speculum’) is ‘Sic Itur ad Astra’. The front of the proscenium below the stage is decorated with swags of grapes and roses hung with coronets and centred by a comic mask with daggers thrust through the eyes. Below is a frieze of dressed-up dancing dogs.

For the private theatricals of the Pic Nic Society, organized by Col. Henry Francis Greville, a little theatre was erected at the Tottenham Street concert rooms. For the rules proposed in Dec. 1802 see a printed leaflet in Burney Coll. (B.M.), ix, No. 229. Sheridan wrote to Greville, 17 Feb. 1802, announcing his determination to oppose the Society as an infringement of the monopoly of the patent theatres. All the morning and evening papers were hostile, the ‘Corps Paragraphique’ being encouraged by Sheridan. ‘The Pic Nic’, pp. x-xxiii (B.M.L., P.P. 5251. i). The attack here depicted is said to relate to an outcry prophesying divine judgement and calamity because rehearsals had been held on Sunday. ‘London und Paris’, ix, 1802, p. 175. Henceforth Sheridan is commonly depicted by Gillray and others as Harlequin. It had been incredibly reported that he played Harlequin Friday in the first performance (1781) of Robinson Crusoe, a pantomime written and produced for Drury Lane by Sheridan. Rhodes, ‘Harlequin Sheridan’, 1933, p. 86 f. Mount Edgcumbe, author of ‘Musical Reminiscences’, was in great request as an amateur actor. Lord Holland notes (to BMSat 10169): ‘Every subscriber provided a dish for the supper.’